Yesterday I took delivery of my 2012 VW Jetta 2.5 SE with a 5-speed.  For the last two years, I drove a 2009 Honda Civic LX coupe with an automatic.  Before that, I’d driven manual transmission cars for ~7 years.  I’d had enough of driving an automatic and finally made the switch back 🙂

It may seem odd to trade in a 2 year old Honda Civic, with no problems and only 49K miles.  Indeed, my Honda had perfect reliability and never once gave me any concern.  It performed well in all driving situations and looked good doing it!  Would I recommend a 2009 Civic to a friend? YES!  Having said that, I was out of warranty and still had at least another 4-5 years of payments ahead of me if I were to buy it off the lease.  Turning the car in at the end of the lease was not an option as I would have paid over $6000 in excess mileage fees!   So why did I not just buy a new Civic?  First, I didn’t want to just buy the same car over again.  The 2012 Civics are not appreciably different than the 2009s and the rates on new Civics aren’t especially attractive.  Especially when compared to the price and features of other new cars.

The two cars my search came down to were the 2012 VW Jetta and the 2011 Mazda3 5-door.  The Mazda3 gets rave reviews and it was actually the runner up to the Civic when I was car shopping 2 years ago.  It offers features and a driving experience not often found in cars of similar pricing.  While I enjoyed driving the Mazda3, it didn’t “wow” me and didn’t quite meet the high expectations I had when test driving.  I drove the 2012 Jetta after driving the Mazda3 and was sold.  The 2.5 5 cylinder in the VW is a fantastic engine.  The harmonics the extra cylinder and 4 extra valves give over the 4 cylinder in the Mazda make it sound like a real engine.  The Mazda3 felt cramped for a hatchback and the Jetta offers the same cargo space in the trunk despite the Mazda being a hatchback.  The Jetta’s cleaner lines inside with less distracting lights and displays give it a more timeless feel.  All that plus the higher MPG rating of the Jetta put it ahead of the Mazda despite the Mazda having a sunroof, Bose stereo, 17in alloy wheels and rear disc brakes.

Now on to my soap box rant:  All the “expert” reviews of the Jetta point out the “cost-cutting” areas in the 2011/2012 Jetta versus earlier generation Jettas.  These include a hood prop instead of a gas strut to support the hood, goose-neck hinges instead of a gas strut to support the trunk lid, harder interior plastics (and plastic rear decklid), torsion beam rear suspension (vs fully independent), hydraulic steering (vs electric), rear drum brakes (vs. disc), no remote fuel door opener, and you can’t put all the windows down by holding the unlock button down on the remote.  Reviewers cite these as a bad thing for the Jetta, what they fail to acknowledge is that these are all common place in Hondas, Toyotas, Hyundais, Mazdas, etc.  Do they call out Honda for having a plastic rear decklid, hood prop, goose neck trunk hinges and rear drum brakes??  NO!  Why pick on VW for having these and not also say that every other car in this class DOES have them?  In their glee to fault the Jetta, they ignore that it gets competitive gas mileage while offering the most powerful engine, has standard A/C, power windows and locks, remote entry with trunk release, split-folding rear seat, traction control and one of the largest interiors and trunks in the class.  Oh and the interior trim is well made, attractive and nicely arranged.  Sure it doesn’t have some things that earlier Jettas have, but that doesn’t make it any less than it’s competitors.  Bitches gotta recognize.

A very vague question but one worth mulling over.  What are some of the first terms to pop in your head when reading that?  Did “status symbol” make the list?  This weekend I went to see the Titanic traveling exhibit.  It is a well-done display and I recommend going to see it should it arrive in your area.  One of the panels pictured the library/reading room on board the ship.  It was a gigantic space and came fully stocked with a range of books and a veritable furniture store worth of comfy couches and lounge chairs.  According to the exhibit, a first class ticket for the Titanic cost (in today’s money) roughly $100,000 (yes, you read that correctly!)  Still expensive, a third class ticket cost around $50,000.  I linked to an article on the libraries of the rich and famous in an earlier post, and this is another example of how libraries are a status symbol.  But do they define the status of the space or the user/creator?

As the old adage goes, “one man’s trash is another man’s treasure.”  Here is a primary example!  When I was heading out of work yesterday, I glanced over at our free book shelf by the door and noticed one titled “Books and Printing:  A Treasury for Typophiles,” published in 1963.  This is an edited volume of essays on the history and development of books, typography, and printing.  I honestly don’t know how much (if any) of it I will read, but something like the intrinsic value of a book on books and type prompted me to rescue this lonely volume from the free shelf.

When not messing around with books I love to photograph whatever catches my eye.  In fact, the photo background here on my blog is my own work!  My love of photography really began in June 2009 when I took a summer, graduate history class to D.C. studying American memory and history.  Part of the course was to document what we saw in photos for use in our course paper.  This turned out to be one of my favorite parts of the course as I got inspired by the impressive architecture and beauty of D.C.  It also helped that my pictures impressed a few classmates, which encourage me to keep shooting.  I really had no idea what I was doing technically, but that didn’t stop me.  One thing led to another and now two years later I am about to have my second show!  From September 1-30th, I will have 15 pieces on display at a local coffee shop.  I’m very excited to put them up and see my work publicly displayed in a heavily trafficked business!

I’ll close this post with a few lessons I’ve learned about being a photographer:

1) Don’t get caught up in having the “best” body, lenses, bag, tripod, or any other gear you can waste money on – I have seen (and taken) great shots with point and shoot and seen bad shots taken with cameras costing thousands of dollars.  The photographer is only as good as his/her eye and imagination.

2) Photography is about having fun and being creative.  Experiment!  Even the most mundane object can be photographed in a unique and interesting way.

3) Lastly, just keep shooting!  Don’t lose courage if your photos don’t always come out as you want them to.  Use that as motivation to keep at it! 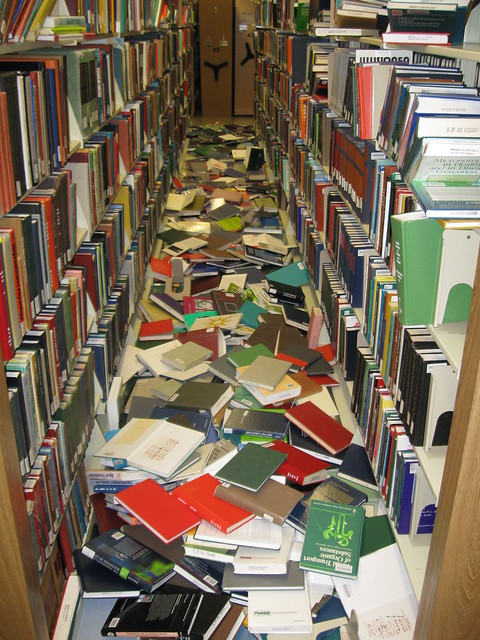 This link will take you to a flickr album posted by the University of Maryland library in the wake of the quake that happened here on the East coast on the 23rd.  I am quite thankful that this did not happen where I work, but it is a reminder of how libraries need to be prepared for potential disasters.  Fortunately books tumbling off shelves is not as big a disaster as the floors collapsing, for example, but it nonetheless requires a response.

A coworker of mine posted this link to her facebook page and I found it blog worthy.  What I find most impressive about this piece is that it exposes how important collections of books and other media are to some of the word’s most notable celebrities.  I do not recall libraries being featured on MTV’s Cribs, but these pictures suggest that libraries get just as much attention in the homes of celebrities as their pools or garages.  By association, this elevates these rooms to a symbol of status while simultaneously recognizing the importance of literature and art to the identity and success of the celebrities themselves.

As a librarian/archivist/nerd, these private collections make me drool a little.  And I am sure the same is true for many others in my profession.  But what is even more fascinating is that these rooms were not created to be shown off to me or any other librarian or archivist – these are instead built for a specific purpose and utility in the show piece that is the mansion.

I also cannot help but dream that the attention given to these private libraries makes a case for aesthetic of the traditional library in the face of digital media.  As institutional libraries lose space and become increasingly online repositories, I hope that the public comes to realize the importance of the library as an institution.

I have decided to go back to graduate school and pursue one of two masters degrees – either Library Science or Community College Teaching/Adult Education.  While they appear quite different, my reasons for each are much closer together.  Library science is the obvious continuation of my current career trajectory.  I already have a masters in public history with a concentration in archives and records management.  My background in history plus archives knowledge and experience qualify me to be a reference librarian in a university special collections – all I need are those three letters added to my name to keep my application from being tossed immediately in the shredder 😛  I’ve decided I would enjoy working as a reference librarian in a special collections library because it would allow me to interact with both historical records and patrons.  Plus there is the thrill of the hunt for an obscure record!

Community college teaching is another career that fuses my love of history and commitment to sharing that love with others.  There is the added benefit of not having the “publish or perish” mantra echoing around in your head 😉  Added to that are the benefits of being on an academic schedule and being a state employee.  Also not having to work a strict 8-5, M-F schedule allows for greater freedom to get work done.  Finally, teaching is a job I could really commit myself to and feel good about at the end of the day.  The little bit of TAing I did in grad school showed me how much I care about helping students learn history.

Where this leaves me is looking at schools for each program and figuring out the best fit.  Ultimately it will come down to cost and location as the deciding factors to each school.  But how will I decide which program?  That’s the question…

Here goes!  I’m new to this blog thing so bear with me 🙂  This blog is intended to be self-reflexive about my profession – where I’ve been, where I am, and what lies in the future.  A good friend and fellow future archivist commented in her blog about web-presence and this is my attempt to create just that.  I hope, too, that this will be interactive.